Visual proof of why having smartphone optimised websites for smartphones matters

Update: The website is no longer there, but the article is still valid.

6 years ago I created this website mettereissmann.dk. It was going to be part of a political campaign where it’s role was to function both as a business card, and as a media for longer articles that wouldn’t fit well in social medias. The articles should be easy to share to avoid isolation of the content (and to increase awareness and traffic). The campaign was a great success and she won the election.

4 years ago for the national election campaign I adjusted the website slightly to reflect the visual trends of that time, but it was only three weeks ago I optimised that same website again for smartphones. The next national election will most likely be held in the second half of 2015 and the politicians are getting ready to campaign ones again. This time I redid the looks a bit more but most important also made the website responsive so that it fits smartphones and tablets better.

I know this is old news. And very obvious that if you optimise a website for smartphones – it most likely works better on smartphones. But this is actually the first time I’ve been able to see the effect of that, isolated and very clearly on a graph. Usually the numbers are clouded because of many simultaneous changes and activities. 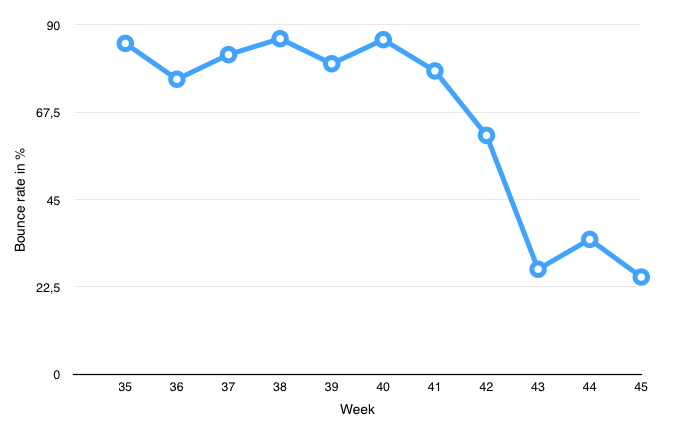 What this graph shows is the bounce rate on the website for smartphones. I worked with the website in week 41+42 and the result (one of them) is a lower bounce rate for smartphones moving from 80% to a new average of 28%. That’s awesome! Before the content was difficult to read and you would have to zoom in and out a lot. Now it fits and the result is a much better user experience. 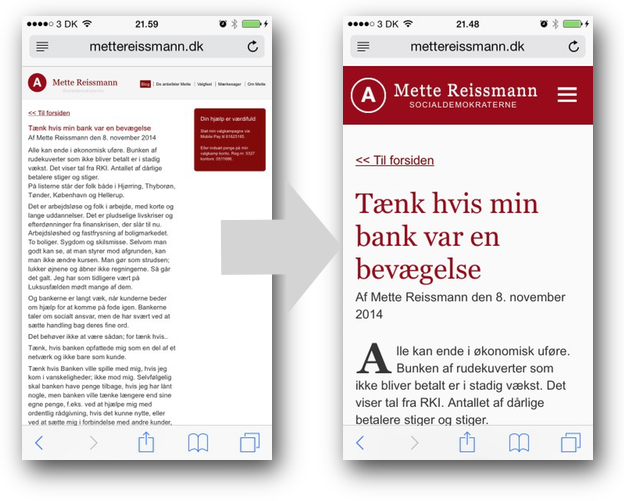 For those unfamiliar with the term bounce rate it’s an easy way to measure the quality of the website and the content. It’s the amount in percentage of the people who visits your website and immediately leaves again without doing anything.

You want this number to be as low as possible. That means that less people are leaving right away. It means that more people are continuing on, flipping pages, reading your content.
It’s the best and simplest quality measurement I know of and I use it for whole websites, single pages and traffic coming from advertisement and other channels.
If you’re running a display campaign (banner-campaign) and you have a high bounce rate on the traffic that origins from that campaign, it tells you that there’s a lack of relevance between the advertisement and the content on the landing page. OR that the ad is placed where people can’t avoid clicking, but that would be more the exception than the case.

It isn’t something i didn’t know. But it’s always amazing to see the staggering numbers. Good job on the site, i like it a lot 🙂

Thanks Anders, much appreciated! 🙂

1
Reply
Lowhangingfruits.com - and some other bits and pieces
wpDiscuz
2
0
Would love your thoughts, please comment.x
()
x
| Reply